The history of the studies done on photosynthesis dates back into the 17th century with Jan Baptist van Helmont. He rejected the ancient idea that plants take most of their biomass from the soil. For the proof, he performed willow tree experiment. He started with a willow tree of 2.27 kg. Over 5 years, it grew to 67.7 kg. However, the weight of the soil only decreased by 57 grams. Van Helmont came to the conclusion that plants must take most of their weight from water. He did not know about gases.

Joseph Priestley ran a series of experiments in 1772. He tested a mouse, a candle, and a sprig of mint under hermetically sealed (no air can go in or out) jar. He first observed that a mouse and a candle behave very similarly when covered, in that they both “spend” the air. However, when a plant is placed with either the candle or mouse, the plant “revives” the air for both.

Further ideas were brought about in the late 1700’s. Jan Ingenhousz and Jean Senebier found that the air is only reviving in the day time and that CO2 is assembled by plants. Antoin-Laurent Lavoiser found that “revived air” is a separate gas, oxygen.

But what is the oxygen “maker”?

There are many pigments in plants, and all accept and reflect some parts of rainbow. To identify the culprit, Thomas Engelmann ran an experiment using a crystal prism. He found that Spirogyra algae produce oxygen mostly in the blue and red parts of the spectrum. This was a huge find. It tells that the key photosynthetic pigment should accept blue and red rays, and thus reflect green rays. Blue-green chlorophyll best fits this description.

Another important fact was discovered by Frederick Blackman in 1905. He found that if light intensity is low, the increase of temperature actually has very little effect on the rate of photosynthesis. However, the reverse is not exactly true, and light is able to intensify photosynthesis even when it is cold. 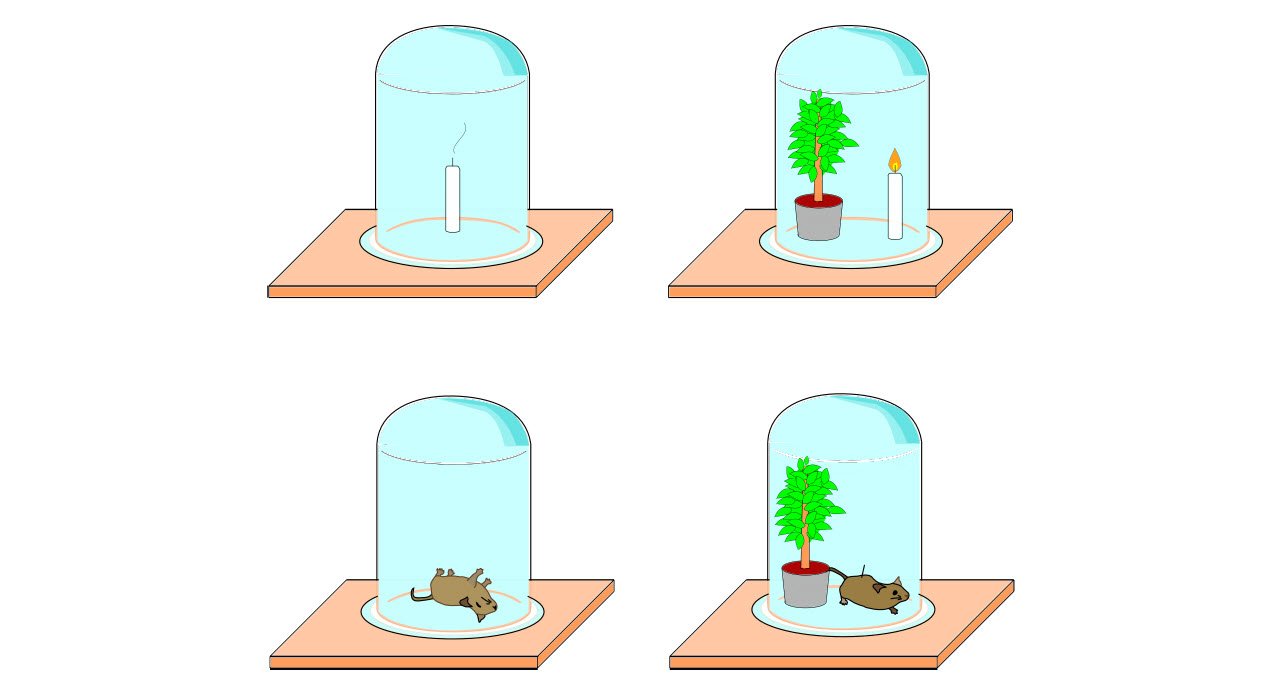 This could not happen if light and temperature are absolutely independent factors. If temperature and light are components of the chain, light was first (“ignition”) and temperature was second. This ultimately shows that photosynthesis has two stages.

The first is a light stage. This stage relates to the intensity of the light. The second stage is the enzymatic (light-independent) stage which relates more with the temperature.

Sometimes, enzymatic stage is called “dark” but it is not correct because in darkness, plant will run out of light-stage ATP almost immediately. Only some C4-related processes could run at night.

Since water molecules are spent on light stage to make oxygen and at the same time are accumulating, one of the best “equations” describing photosynthesis as a whole is

The basic idea of light stage is that the cell needs ATP to assemble (later) carbon dioxide into sugar. To make ATP, the cell needs electrical current: proton pump.

To make carbohydrates from carbon dioxide (CO2 apparently has no hydrogen), the cell needs hydrogen atoms (H) from hydrogen carrier, NADP+ which at the end of light stage, becomes NADPH.

The main event of the light stage is that chlorophyll reacts with light, yielding electron (e–) and becoming oxygenated, positively charged molecule. Then electron, proton and NADP+ react to yield NADPH which will participate in enzymatic reactions later on. 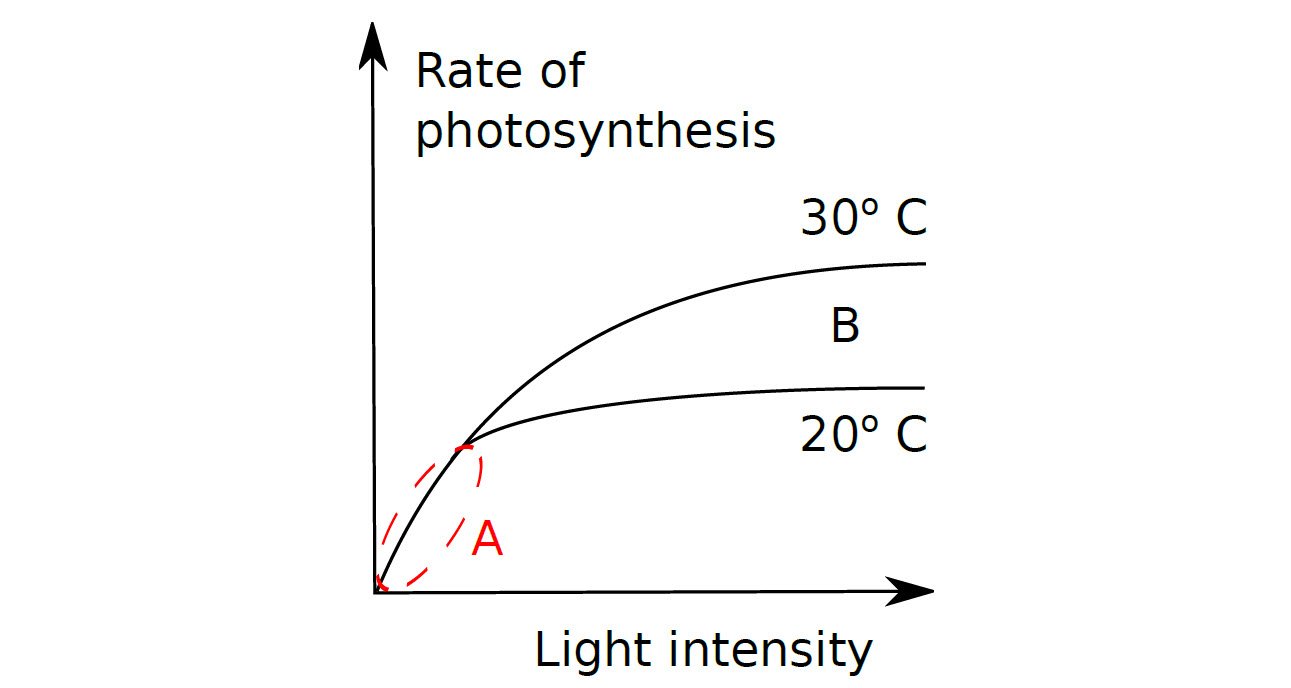 The positively charged chlorophyll is extremely active chemically, therefore it splits water molecules (“photolysis of water”) into protons (which accumulate inside thylakoid), oxygen (O2) and electron. The electron returns to chlorophyll. When increasing gradient reaches the threshold, the proton pump starts to work as protons (H+) pass along the gradient. The energy of passing protons allows for the ATP synthesis from ADP and Pi (inorganic phosphate). On the other side of membrane, these protons make water with hydroxide ions.

Ultimately, the light stage starts from light, water, NADP+, ADP and results in an accumulation of energy (ATP) and hydrogen (NADPH) with a release of oxygen which is a kind of exhaust gas. 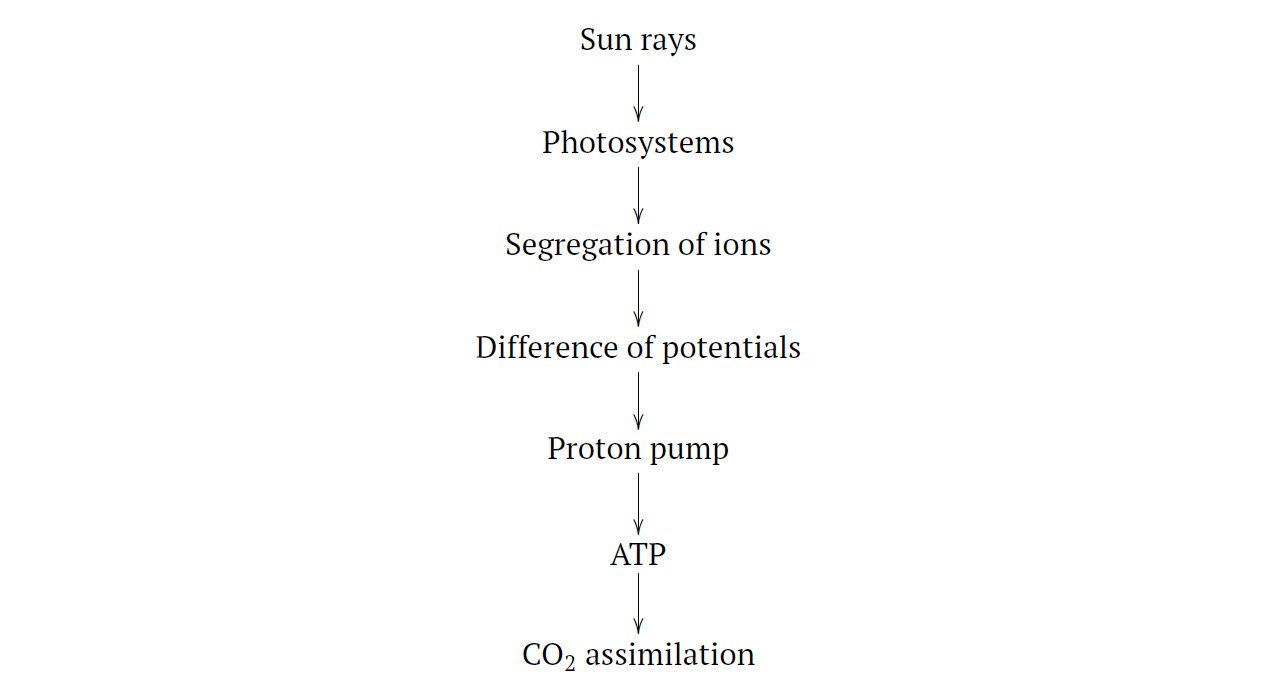 The enzymatic stage has many participants. These include carbon dioxide, hydrogen carrier with hydrogen (NADPH), ATP, ribulose biphosphate (RuBP, or C5), and Rubisco along with some other enzymes. Everything occurs in the matrix (stroma) of the chloroplast.

The main event of the enzymatic stage is CO2 assimilation with C5 into short-living C6 molecules. Assimilation requires Rubisco as an enzyme. Next, this temporary C6 breaks into two C3 molecules (PGA). Then, PGA will participate in the complex set of reactions which spend NADPH and ATP as sources of hydrogen and energy, respectively; and yields (through the intermediate stage of PGAL) one molecule of glucose (C6H12O6) for every six assimilated molecules of CO2. NADP+, ADP and Pi will go back to the light stage.

This set of chemical reactions returns RuBP which will start the new cycle of assimilation. Consequently, all reactions described in this paragraph are part of the cycle which has the name “Calvin cycle” or “C3 cycle” (because the C3 PGA molecules here are most important).

In all, enzymatic stage starts with CO2, NADPH, ATP and C5 (RuBP). It ends with glucose (C6H12O6), NADP+, ADP, Pi and the same C5. With an addition of nitrogen and phosphorous, glucose will give all other organic molecules.

To summarize, the logic of photosynthesis is based on a simple idea: make sugar from carbon dioxide. Imagine if we have letters “s”, “g”, “u”, and “a” and need to build the word “sugar”. Obviously, we will need two things: the letter “r” and the energy to put these letters in the right order.

The same story occurs in photosynthesis: it will need hydrogen (H) which is the “absent letter” from CO2 because sugars must contain H, O and C. NADP+/NADPH is used as hydrogen supplier, and energy is ATP which is created via proton pump, and the proton pump starts because light helps to concentrate protons in the reservoir. 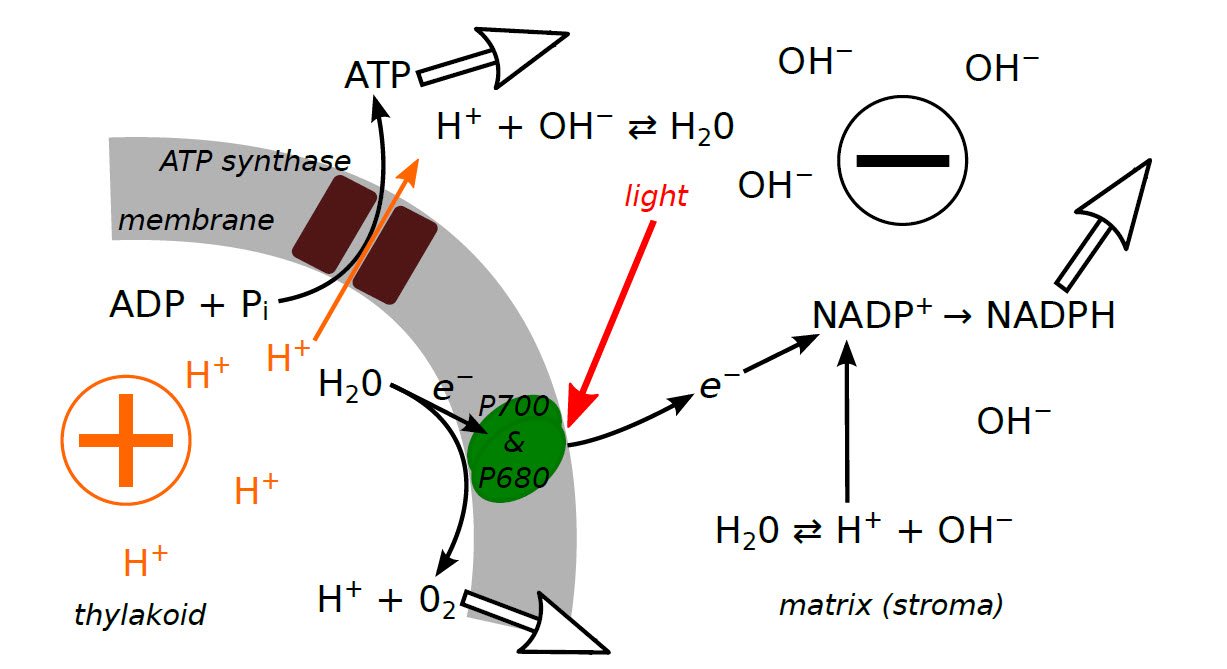 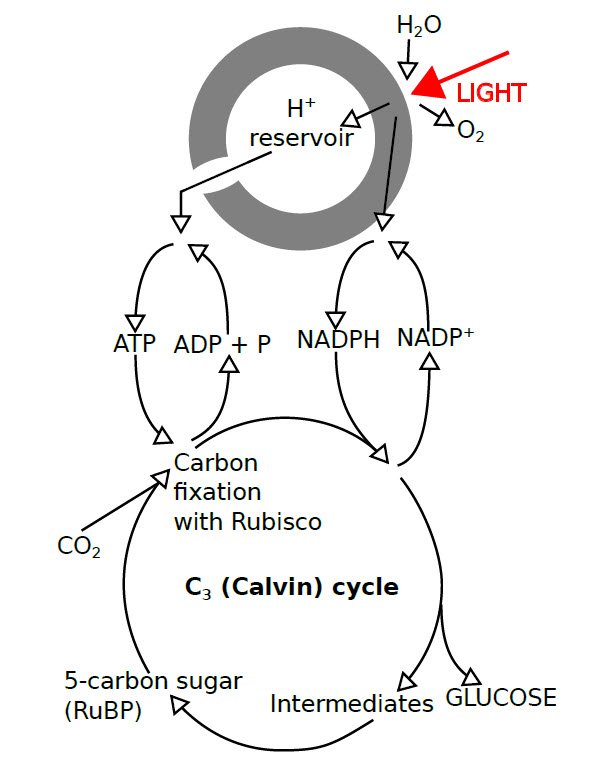 This glycolate is returned to the Calvin cycle when the cell uses peroxisomes and mitochondria, and spends ATP. The process of photorespiration wastes C5 and ATP which could be more useful to the plant in other ways.

If concentration of CO2 is high enough, assimilation will overcome photorespiration. Consequently, to minimize the amount of photorespiration and save their C5 and ATP, plants employ Le Chatelier’s principle (“Equilibrium Law”) and increase concentration of carbon dioxide. They do this by temporarily bonding carbon dioxide with PEP (C3) using carboxylase enzyme; this results in C4 molecules, different organic acids (like malate, malic acid) with four carbons in the skeleton.

When plant needs it, that C4 splits into pyruvate (C3) plus carbon dioxide, and the release of that carbon dioxide will increase its concentration. On the final step, pyruvate plus ATP react to restore PEP; recovery of PEP does cost ATP. This entire process is called the “C4 pathway”.

Plants that use the C4 pathway waste ATP in their effort to recover PEP, but they still outperform photorespiring C3-plants when there is an intensive light and/or high temperature and consequently, high concentration of oxygen. This is why in the tropical climate, C4-crops are preferable. 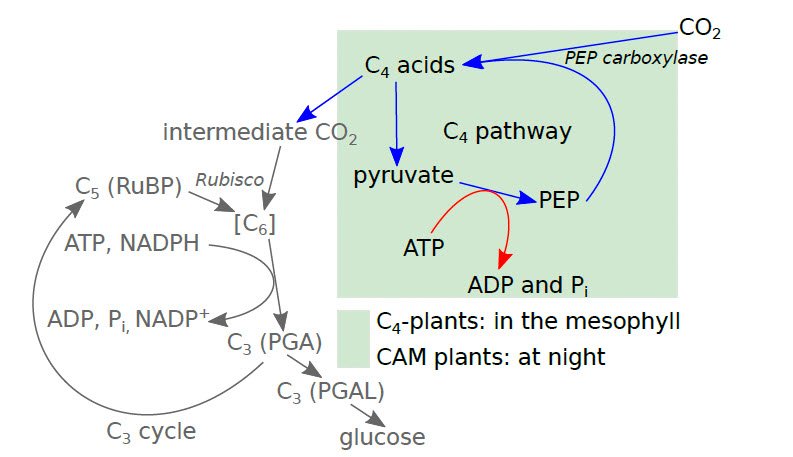 Two groups of plants use the C4 pathway. Many desert or dryland plants are CAMplants which drive the C4 pathway at night. They make a temporal separation between the accumulation of carbon dioxide and photosynthesis. CAM-plants make up seven percent of plant diversity, and have 17,000 different species (for example, pineapple (Ananas), cacti, Cactaceae; jade plant, Crassula and their relatives).

“Classic” C4 plants drive C4 pathway in leaf mesophyll cells whereas their C3 is located in so-called bundle sheath cells. This is a spatial, rather than temporal separation.

These C4-plants make up three percent of plant biodiversity and have more than 7,000 different species (for example, corn, Zea; sorghum, Sorghum and their relatives). 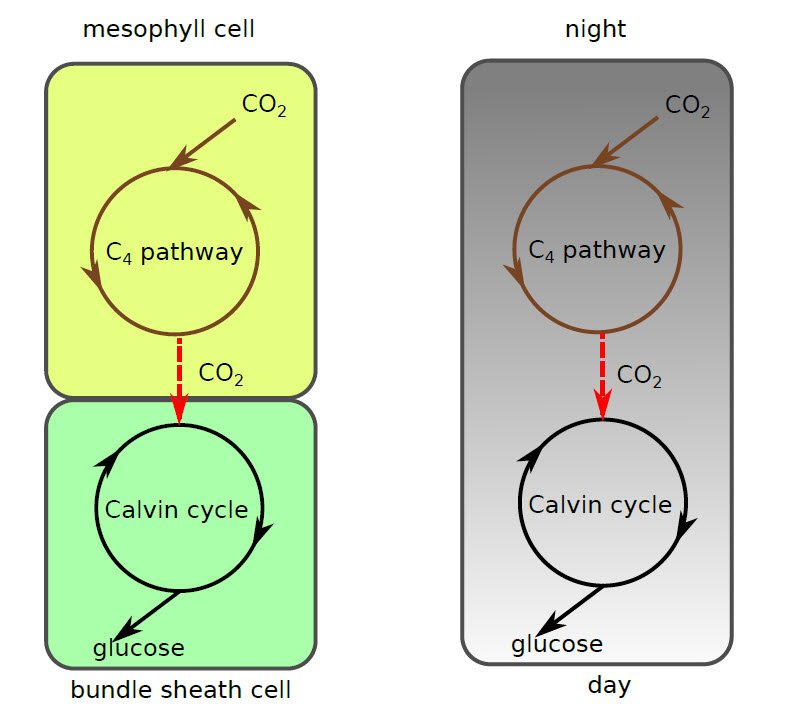 In all, both variants of C4 pathway relate with concentration of carbon dioxide, spatial or temporal. Both are called “carbon-concentrated mechanisms”, or CCM.

There are plants which able to drive both C3 and C4 pathways (like authograph tree, Clusia), and plants having both “classic” C4 and CAM variants (like Portulacaria).

The common misconception about plants is that their only energy-related metabolic process is photosynthesis:

However, as most eukaryotes, plants have mitochondria in cells and use aerobic (oxygen-related) respiration to obtain energy:

Typically, plants spend much less oxygen in respiration than they make in photosynthesis. However, at nights plants do exactly the same as animals, and make only carbon dioxide!

35 Amazing Facts of Plants You Need To Know

Common Adverbs and Prepositions You Need To Learn

80+ Most Commonly Used Adjectives in English

[TOEFL] 400+ Essential Words and their Meanings